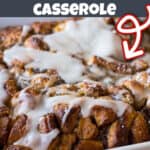 This Cinnamon Roll French Toast casserole is perfect for the holidays and special occasions but can also be a great weekday breakfast. It’s basically like your favorite classic French toast except you don’t have to babysit it! Throw it in the oven and let it bake away! Popping breakfast in the oven and letting it do its thing is my favorite way to make breakfast because it’s such an easy method!

This easy recipe only takes 30 minutes and uses premade cinnamon rolls. Make it ahead or the morning of — whatever fits your schedule!

One year my sister brought the most scrumptious cinnamon roll casserole for breakfast on Thanksgiving Day and it quickly became a must-make during the holiday season.

I only have one sister and we are very close even though we live 4 hours from each other. We talk on the phone almost every day, and she is always finding fun recipes for me to try.

We fell in love with this one, and we make it all the time. It’s an easy holiday brunch, but we also love it for Saturday mornings, Sunday brunch, or lazy days all year long.

It goes so well with all kinds of breakfast dishes. If you are serving a crowd, it’s always a good idea to plan some other easy breakfast recipes for the table, like savory breakfast sliders and hashbrown breakfast casserole plus some fruit for a healthy option.

Why I love this recipe:

Mornings here on the farm are BUSY. Even on weekends, farming never ends! I love having an easy, hands-off, homemade recipe to serve the kids for breakfast.

Cinnamon roll casserole is perfect for so many reasons!

This recipe is great for a lazy day or a fancy brunch, too. We make it for Easter, Thanksgiving, Christmas morning breakfast, and sometimes even for birthdays if one of the kids requests it. In other words, it’s really the ultimate breakfast dish any time.

For this recipe, you only need a few simple ingredients.

What are my favorite cinnamon rolls? Well, for sure it’s my homemade potato cinnamon rolls. Making cinnamon rolls from scratch takes forever to make though and seems like too much extra effort!

For this recipe, I like using Pillsbury cinnamon rolls. To me, they are the best we have tried (and we make this recipe a lot!), but there are plenty of other brands out there. Just remember you need a total of 16 cinnamon rolls.

You can also use frozen cinnamon rolls. You’ll need to allow extra time for them to rise.

This recipe for cinnamon french toast casserole is pretty amazing with a little extra maple syrup drizzled over the top. It’s also pretty good topped with fruit or other syrups!

Here are a few suggestions you can add right to the casserole after it bakes or put it on the table and let everyone add their favorites!

Once you have your ingredients ready, you are all set to make this cinnamon roll French toast bake. I know you are going to love how easy it is!

Step 1: Preheat your oven to 375°F if you are baking it immediately. Skip this step if you’re making it ahead to bake in the morning.

Step 2: Melt the butter (microwave is fine) and pour it into a 9×13 baking dish. Spread melted butter to coat the baking pan.

Step 4: When you’re done, you should have 64 cinnamon roll pieces. Place all the pieces in the buttered baking dish. Set aside.

Step 5: Get out a separate bowl to make the custard. Whisk the eggs well. Add heavy cream, cinnamon, and vanilla and whisk until well blended. Pour the egg mixture into the dish with cinnamon roll dough. Drizzle the casserole with maple syrup.

Step 6: Refrigerate overnight or bake immediately. (See the Tips & Tricks section for more about making this recipe ahead of time.)

Step 7: Bake in the oven preheated to 375°F for 28-30 minutes or until it is golden brown. Cover the top of the casserole with aluminum foil if it starts to get too brown on the top and the center of the casserole isn’t baked through. Let it rest for 5 minutes. Once it starts to bake, your house will smell absolutely amazing!

Step 8: Meanwhile, knead the frosting packets and drizzle them all over the casserole. Serve with additional maple syrup, whipped cream, or other toppings.

You can make this casserole ahead of time in two ways.

The longer the cinnamon roll bake soaks in the custard the more gooey and soggy it will be. If you bake it right away it will be a little drier.

Sometimes if I have a little extra time (like if I am making a few more breakfast dishes), I will prepare the casserole first and let the custard soak in for about an hour or two in the fridge.

Then about 45 minutes before we’re ready to eat, I pop the casserole in the oven so it is nice and warm when we sit down to enjoy everything.

How to store and freeze

This French toast bake is not only easy to make ahead the night before, but you can even make it months ahead of time!

To reheat frozen French toast casserole, thaw it in the refrigerator overnight. Bake as directed. Or, reheat already baked leftovers in individual servings in the microwave.

I recommend freezing the icing separately or making a fresh batch. This recipe for blueberry sweet rolls has a delicious glaze. (Use more milk instead of lemon juice.)

Does French toast casserole need to be refrigerated?

No, you can bake it right away, but keep in mind it will be a little drier. If you have time, let the egg custard and cinnamon rolls rest in the fridge for at least an hour or overnight for the best, gooiest texture.

How do I know when French toast casserole is done?

When the casserole is still a little wiggly but not runny, it’s ready to remove from the oven. The casserole will continue to bake for about 5 minutes after you take it out of the oven, so the egg/custard mixture doesn’t need to be totally set.

The longer the cinnamon rolls are soaking in the custard mixture the soggier they will be. If you don’t want it to be soggy, bake it immediately after it’s assembled.

Breakfast is one of my favorite things and I even serve it for dinner quite a bit!

Sometimes I am all about savory breakfast recipes, and sometimes I can’t knock my sweet tooth and I have to have a sweet breakfast!

My kids always go crazy for French toast! I’m always adding another french toast casserole recipe to my list of favorite breakfasts! Be sure to check out these favorites! 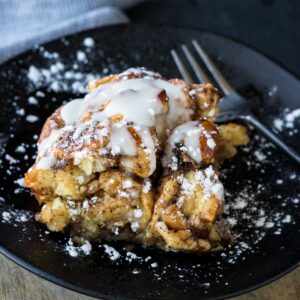 5 from 1 vote
Author Amy
Course Breakfast
Cuisine American
Servings 10 Servings
Prevent your screen from going dark
Prep Time 10 mins
Cook Time 30 mins
Total Time 40 mins
Print
Pin
Share
Cinnamon Roll French Toast Casserole is everything you love about classic French toast except it's in a quick and easy casserole that can be made in 30 minutes! Or, you can make it ahead, let it sit overnight, and bake it in the morning for breakfast or brunch!

You can make this casserole ahead of time in two ways. The longer the cinnamon roll bake soaks in the custard the more gooey and soggy it will be. If you bake it right away it will be a little drier. 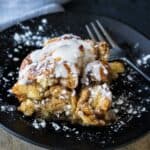