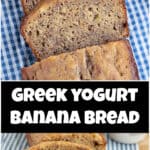 Banana bread is a quick bread and sounds easy to make. For some reason, it is kind of tricky to get the banana bread loaf to bake all the way through and find the perfect balance between gooey in the middle banana bread and overbaked dry banana bread.

Banana bread with Greek yogurt is fluffy and light, a little tangy, and basically foolproof!

Why This is the Best Banana Bread Recipe:

Not all banana bread recipes are the same! Some are really heavy, others are light, some are dry and others are moist. This one is just right!

Greek yogurt banana bread is light and fluffy because the acid in the yogurt activates the baking soda.

One Bowl: Fewer dishes are always a good thing!

You’ll need traditional banana bread recipe ingredients for this recipe. Scroll the recipe at the bottom of this post for the full recipe and instructions.

Let’s talk about a few substitutions you can make.

Yogurt: I like using plain greek yogurt or using vanilla greek yogurt gives the bread great flavor. You can also easily swap sour cream instead of plain yogurt. I don’t recommend using regular yogurt because it’s too thin and won’t give you that perfect texture.

Flour: I always use all-purpose flour. If you want to make an even healthier bread you can use half whole wheat flour and half all-purpose. It will change the texture of the bread and make it a bit more dense, but also healthier.

For a traditional sized bread loaf I really like my cast iron bread pans. These disposable bread pan liners are also game changers! They make cleanup so easy!

Step 1: Preheat the oven to 325 degrees. Prepare two loaf pans by spraying them with nonstick baking spray or lining them with parchment paper. Set aside.

Step 2: Mash bananas in a large bowl for an electric mixer (you can also use a hand mixer) You can smash the banana with a fork, or use the mixer.

Step 5: Add flour and mix on low speed just until incorporated. It’s okay if there are still a few streaks of flour.

Step 7: Pour half of the banana bread batter into one prepared pan and the other half into the other pan. Sprinkle cinnamon and sugar over the top of the batter if you’d like.

Step 8: Bake in the preheated oven for 40-45 minutes. Baking time will vary depending on the size of the bread pan.

Step 9: Cool in the loaf pan for about 5 minutes then remove to a wire cooling rack to completely cool. Then cut into individual slices.

How to tell when banana bread is done? It can be a little tricky knowing how long to bake quick bread so it’s perfectly done. The best way to know when quick bread is baked is to measure the temperature of the bread with an instant read thermometer rather than baking it for a certain amount of time. Banana bread will be perfectly baked when the internal temperature of the center of the bread is between 200 and 205 degrees.

What does Greek yogurt do in baking?

Adding Greek yogurt to banana bread makes it ultra moist and also gives it a nice tangy flavor. The acidity in Greek yogurt (and sour cream) helps activate baking soda which gives the bread a fluffy and light texture.

What is the difference between Greek yogurt and plain yogurt in baking?

Both can be used in baking. Greek yogurt is thicker because the whey has been drained off of the yogurt giving it a thicker and creamier texture. For this recipe, Greek yogurt works best.

How ripe is too ripe for bananas for banana bread?

Bananas get sweeter as they get riper. They should be black or have black spots or black and brown streaks. With spotty bananas, the darker the better! That’s why banana bread is the perfect way to use leftover bananas.

How to Store Banana Bread

It’s important to COMPLETELY cool banana bread before storing it. Banana bread is almost better the next day because the banana flavor gets stronger and sweeter.

Banana bread can be stored in the freezer for up to four months. Wrap completely cooled banana bread in plastic wrap, and aluminum foil, and then store in a freezer bag. To thaw let come to room temperature, then slice.

If you’re looking for more ways to use overripe bananas be sure to check these recipes out next time! 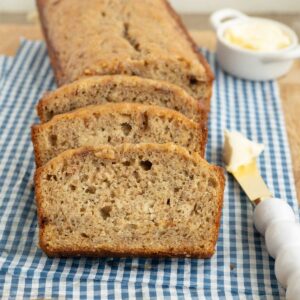 Sour cream may be substituted for Greek yogurt.  Vanilla or plain Greek yogurt may be used.  This recipe can be made into one loaf of bread or muffins. Making it into one loaf will require a longer baking time (about 55-60 minutes)since the bread will be thicker. Muffins will take about 15-20 minutes to bake. 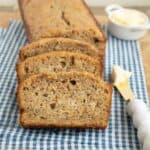