This Chicken Braid is a fun twist on chicken cordon bleu. It looks impressive and tastes amazing, yet it’s super simple to assemble which makes it a perfect weeknight dinner! Chicken, ham, and cheese all wrapped up in a warm, freshly baked bread braid is sure to make everyone in the family happy!

Thanks to Rhodes for sponsoring today’s post! #Rhodes #FrozenDough 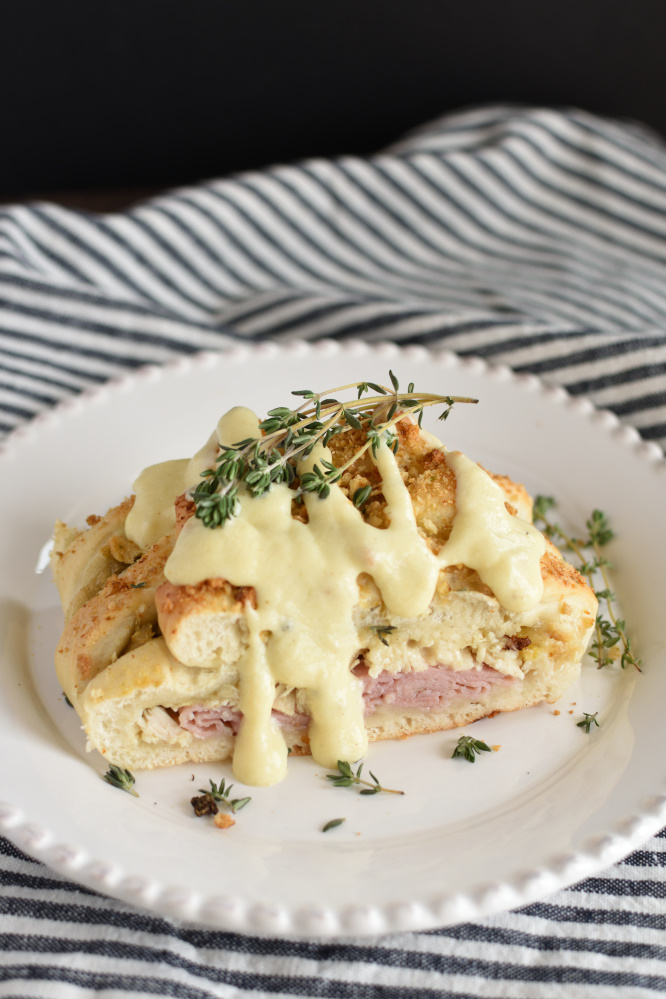 You guys the weeknight dinner time rush is real isn’t it? It doesn’t seem to matter how much I plan dinner time is always hectic. It’s a miracle if all 5 of us are home and able to eat at the same time.

Quick and easy meals like Chicken Braided Bread is exactly the kind of recipes that help me survive the craziness! You know what else is great about it? It can be warmed up in the microwave for the stragglers.

I’ve had a few people tell me their families won’t eat microwaved leftovers and they won’t eat leftovers. Ummm…they’d pretty much go hungry at my house! Hey, I’m just keeping it real here! Leftovers are a huge  part of my life! 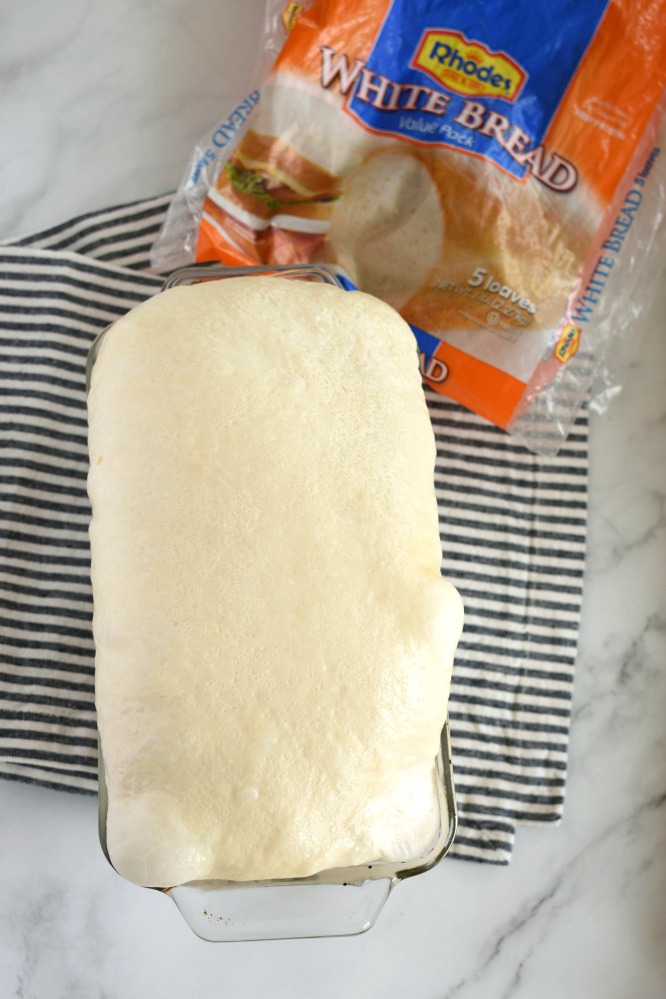 Now obviously Chicken Cordon Bleu Braid is better when it’s piping hot right out of the oven. There’s nothing like that fresh bread smell, especially without all the effort of having to make it! Rhodes bread has become one of my favorite go-to staples. 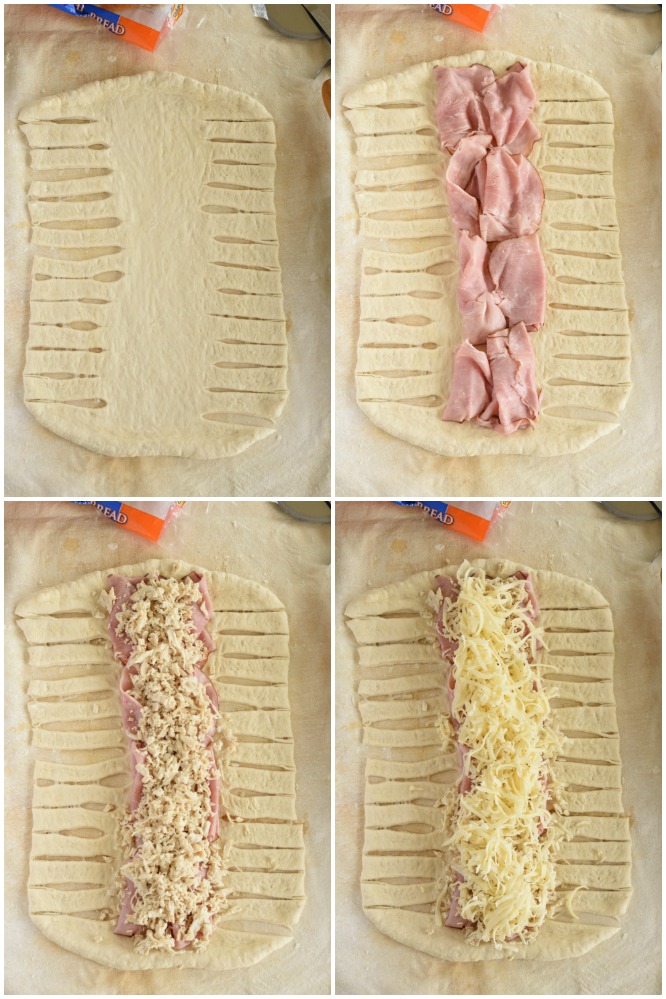 How do I make that braid?

Braids are pretty and they look difficult, but here’s the deal…they are the easiest thing to make!

You are going to be surprised at how easy is to braid them. Everyone will be impressed too! 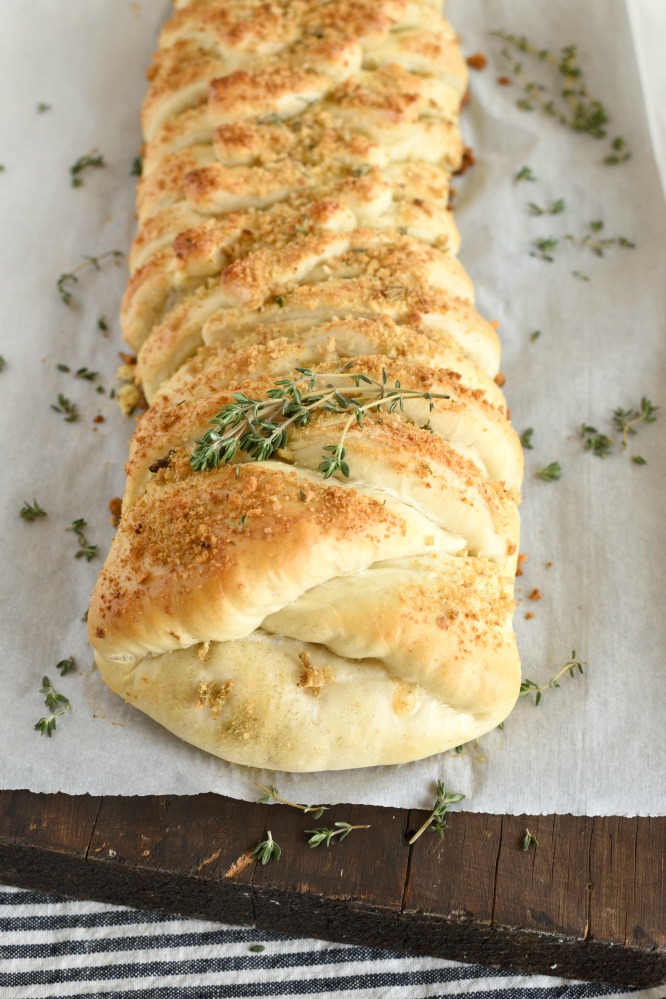 Chicken Cordon Bleu Braid only takes a handful of ingredients 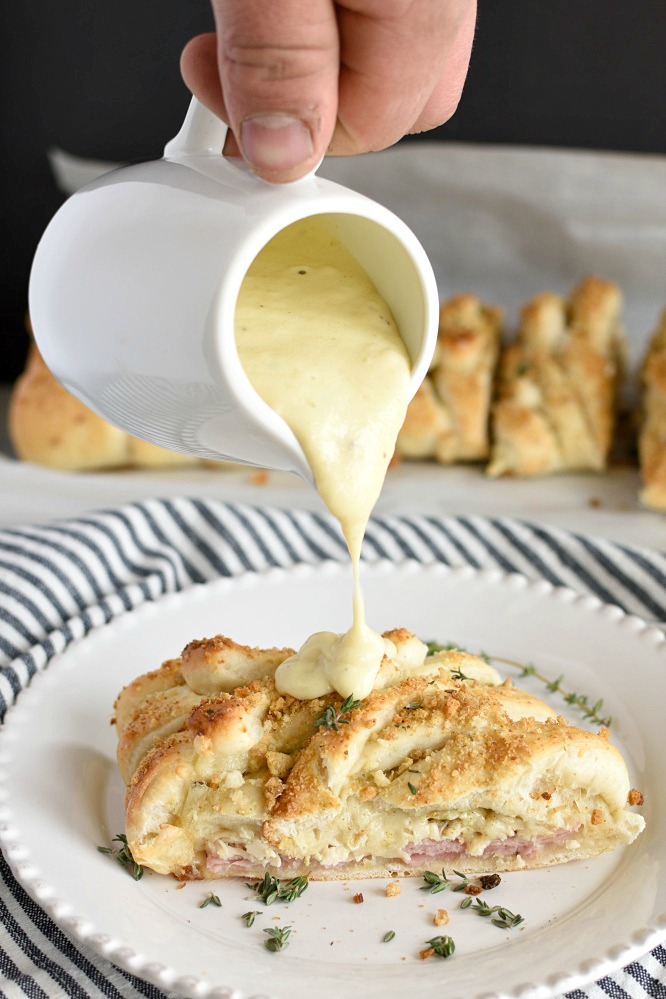 You’re going to want this sauce to serve with the braid.

If you are an overachiever and want to make your own sauce from scratch I’ve included a recipe for you in my Chicken Cordon Bleu Quesadillas! Have at it! 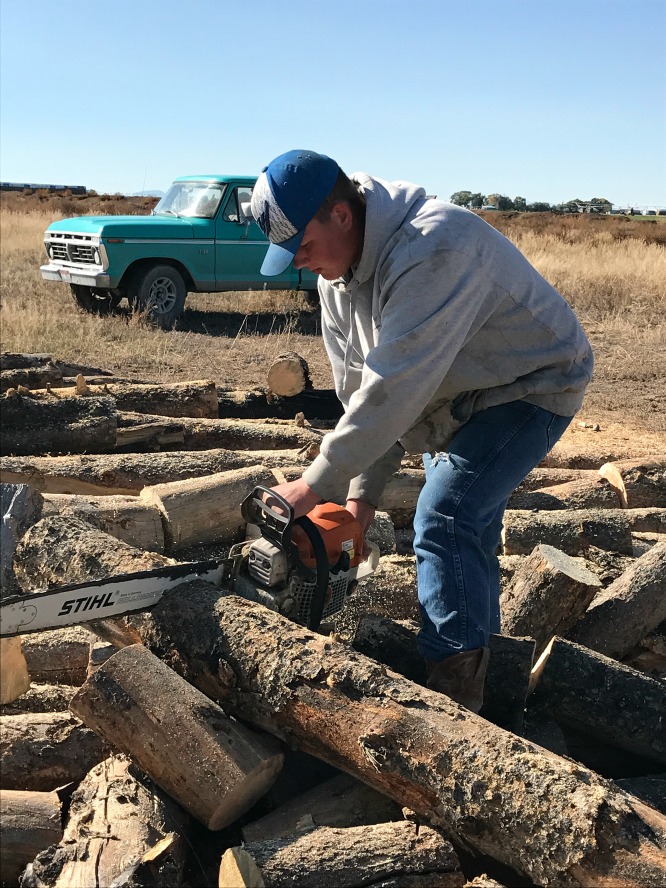 Here’s my second disclaimer of the day: When bloggers take photos we always try to make sure our hands look nice and clean. You know so people would want to eat the food we are taking a picture of. Well, this picture has a picture of my 17 year olds hands. He’s a grease monkey and is always mechanic-ing on some old vehicle.

In fact, his piano teacher asked him to wash his hands before he touched her piano. His hands are actually scrubbed and as clean as they are going to get! Promise! That’s just the way your hands look after you’ve changed the oil, milked cows, pitched hay, and cut wood with a chainsaw!

Oh, and that shot of his hand in the photo looks completely out of portion because his hands are so stinking big. It’s not out of portion. That’s really how big his mits are! 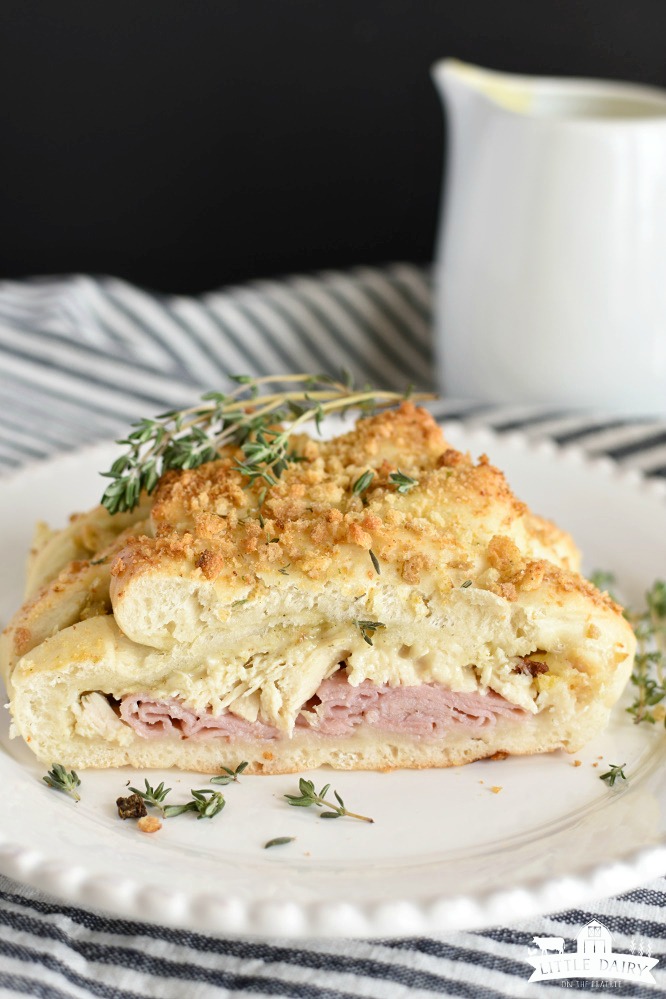 What to serve with Chicken Cordon Bleu Braid! 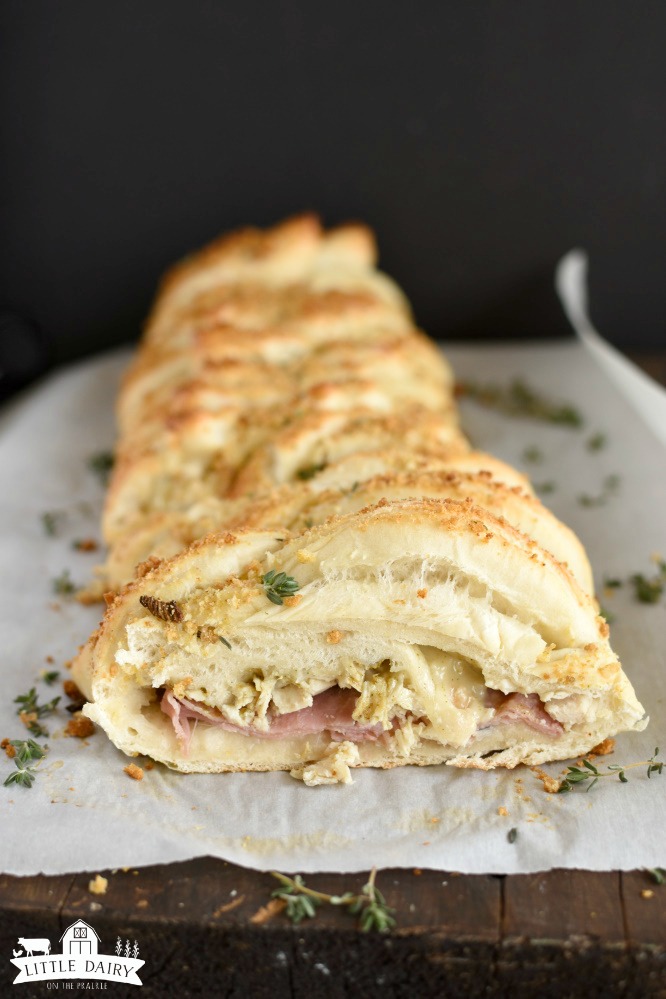 Be sure to print the recipe, save it to Pinterest for later, and sign up for my newsletter so you don’t miss any recipes!

Chicken Cordon Bleu Braid has all the yumminess of diced chicken, gooey cheese, and savory ham all wrapped up in freshly baked bread! If that’s not enough it has crunchy crushed up stuffing crumbs on top! It’s a bit like the icing on the cake! So yummy! 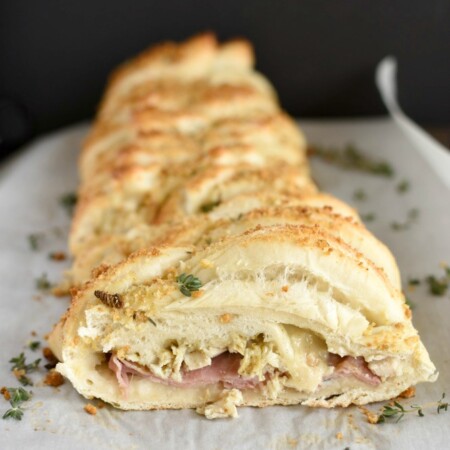 No ratings yet
Author Amy
Course Main Dish
Cuisine American
Servings 6 -8
Prevent your screen from going dark
Prep Time 20 mins
Cook Time 20 mins
Total Time 40 mins
Print
Pin
Share
Chicken Cordon Bleu Braid is an impressive, yet super easy version of the classic! It's the ultimate in comfort food without all the extra effort! Trust me there's no giving up flavor with this one! 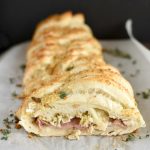